Before January 2018, I had little interest in blockchain technology in general and had early on dismissed the idea of obtaining cryptocurrency as a cumbersome, dry, and byzantine process. Why then, did I surprise myself now and find myself excitedly pouring over information about the concept — and even going so far as to obtain a small amount of ether?

Because of CryptoKitties! I find myself now, along with 200,000+ other users, (shamelessly) buying, selling, and breeding digital toy cats, called CryptoKitties.¹ Each of the adorable, collectible kitties is genetically and (for the most part) pictorially unique, and they are purchased in exchange for ether. In addition to being an amusing, pleasantly-designed product that taps into an innate human desire for ownership, CryptoKitties is an incredibly important case-study, as it offers one of the earliest examples of how blockchain and smart-contract technology can be leveraged in other applications. 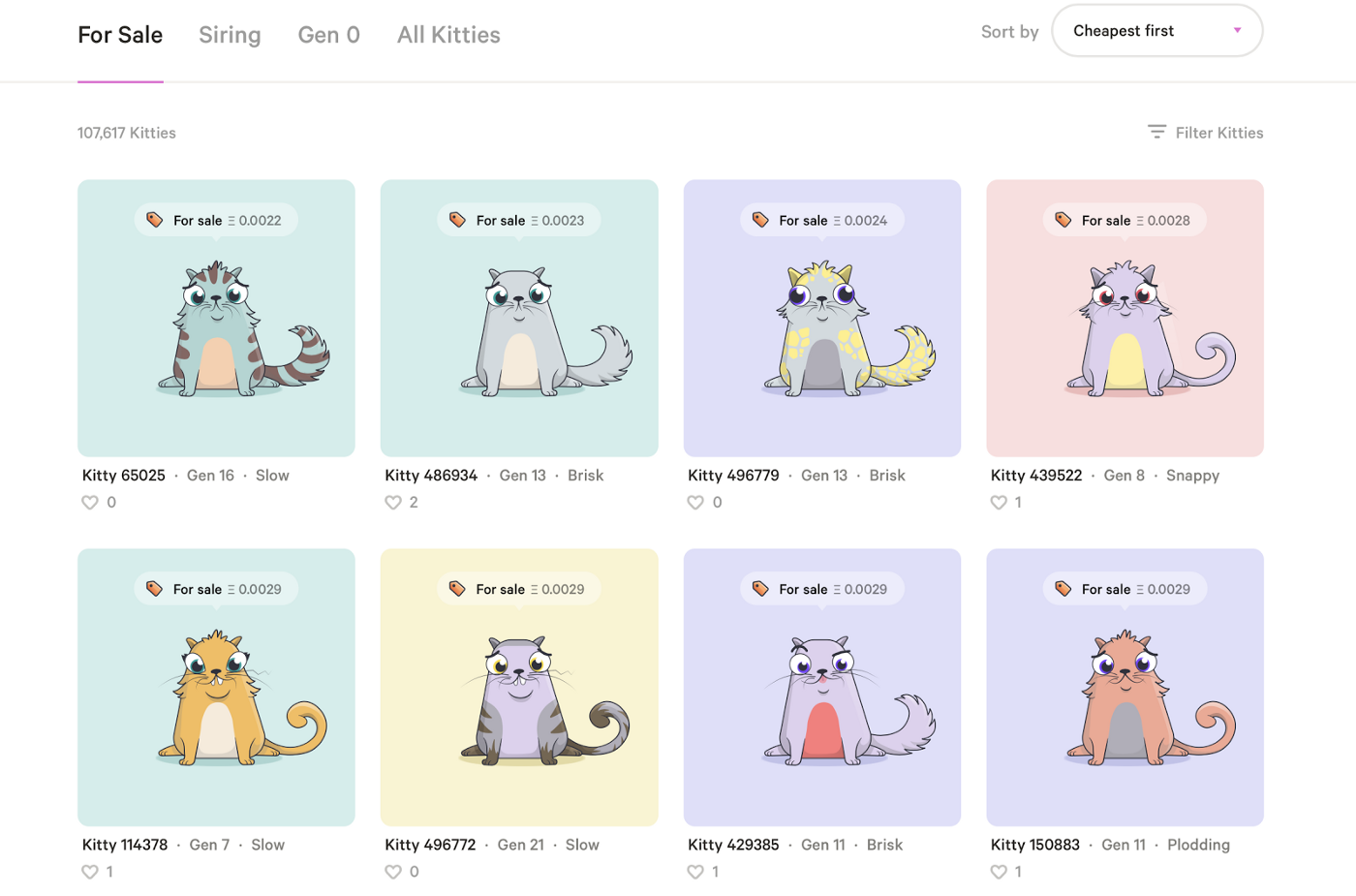 Again, each cat is one-of-a-kind, with a set of “cattributes” resulting from the cat’s unique genetic code, denoted by a 256-bit unsigned integer that is completely immutable (never changes) and governed by smart contracts.³ In this way CryptoKitties is an example of what we call “non-fungible” tokens, because every cat is unique, not interchangeable, and may be worth wildly different values depending on market demand.

Similarly, kitty ownership is another decentralized aspect of CryptoKitties, as ownership of each individual cat remains unchanged unless the current owner explicitly grants permission for an Ethereum transaction.⁴

Centralized aspects, on the other hand, would include the release of new genes and, of course, the product’s complete front-end, which is what makes collecting and breeding CryptoKitties any fun after all.

“Imagine if we just released CryptoKitties tokens (and the ability to breed them or sell them) to the world? TBH, it wouldn’t be much fun, and it would be incredibly slow. That’s why we created the web app, the art, and everything that goes along with it.” - CryptoKitties Staff⁵ 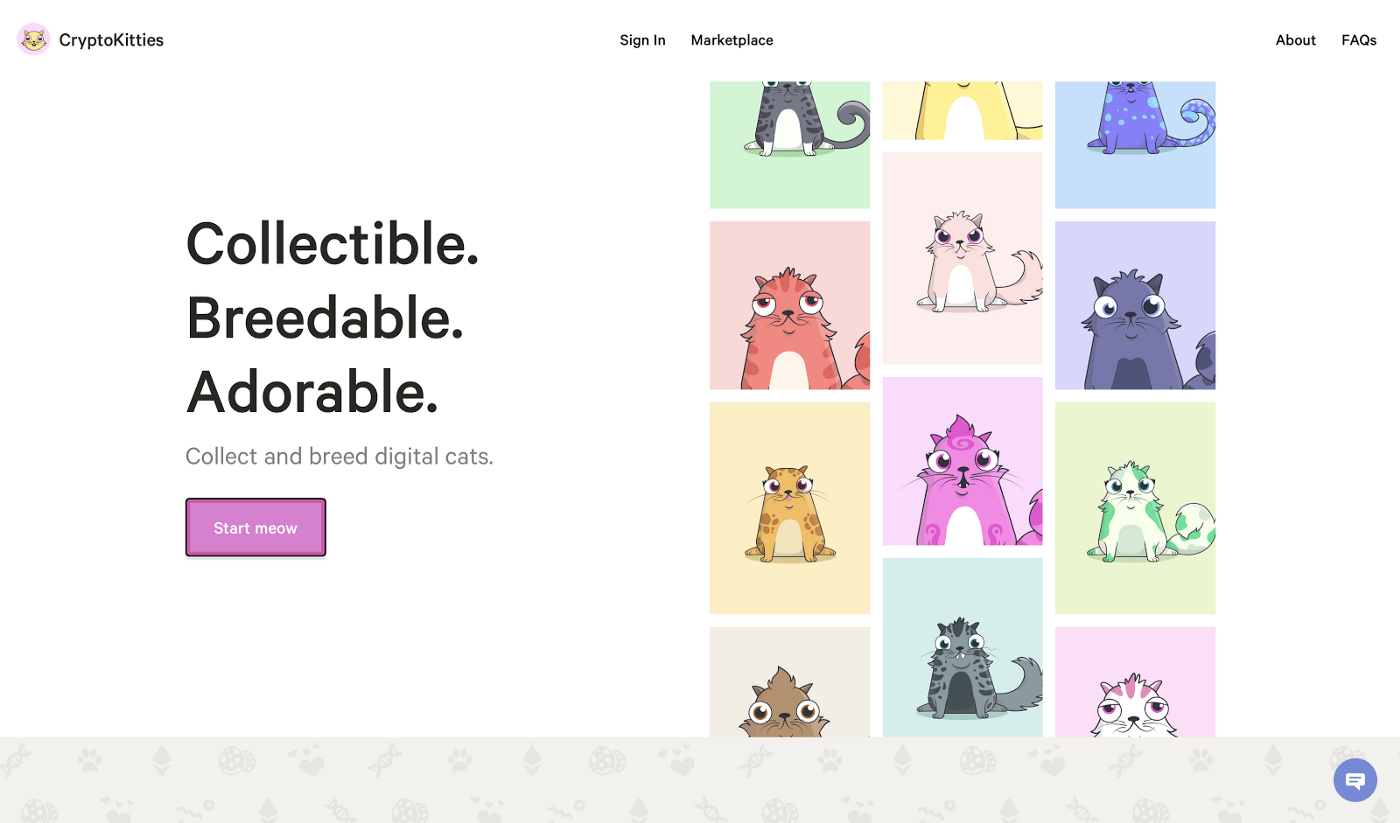 Like the premise of CryptoKitties, its front-end is simple and intuitive. One has a choice to view either the main marketplace, a cat’s profile, or an owner’s collection page. The game’s pallet of bright, friendly, almost infantile pastels both invites and delights the user. And how can you resist those big doe eyes and teeny-tiny paws? It’s like the game’s designers sat around asking themselves how to design the most universally-adorable kitty artwork possible (which I will bet you they 100% did).

Similarly, CryptoKitties’ usage of language and voice is deliberately playful, using simple language and often replacing words with a cat-inspired version, like “meow” for “now” and “pa-purr” for “paper”. In other words, all aspects of the front-end experience — from the font choices, to the artistic style of artwork, to even the language used — are deliberately engineered to be cute. CryptoKitties creators have, in the past, admitted their desire to design a product that attracts an inclusive audience to make up the CryptoKitties community, which is a far cry from the majority of cryptocurrency-related communities that exist today (e.g. r/bitcoin) which are often highly male-dominated and technical-programmer-dominated places. Ultimately, CryptoKitties approachable design and ability to attract a more inclusive audience certainly explains its popularity and status as the first mainstream blockchain technology-based game.

In fact, CryptoKitties has become so popular that it has slowed down the Ethereum network and upset regular traders.⁶ In terms of buying and selling the kitties, users are required to manage their own digital wallet (e.g. MetaMask) and are limited to ether for purchasing and selling kitties. And while we still haven’t reached a place where we’re able to buy a cup of coffee down the street with our cryptocurrencies (and, due to slow processing times, high fees, great fluctuations in prices, and generally high barrier of entry, we may never will)… at least for now we can buy a $10 cat.⁷

And ultimately, it is the front-end that provides any sort of meaning to the application. If the entire CryptoKitties application was taken offline, and no one backed up all the images, “you would be left with only owning a meaningless 256-bit integer.”⁸ This is important, because it tells us that with CryptoKitties, and all the similar blockchain-based games and “blockchain collectable” applications, it is the front-end that ultimately determines the market value of each cat, providing a lesson for us in digital scarcity. For the first time, we are seeing non-fungible digital tokens (here, unique cats), purchased with fungible tokens (here, ether), with each cat only able to be produced by breeding a particular combination between two parent cats. The image of the cat, and what determines what it looks like, happens completely server-side. Without the front-end, again, all we have is an unsigned 256-bit integer.

Within a global context, by gamifying the idea of digital collectables in an approachable way, CryptoKitties has become one of the first applications based on smart-contracts to reach the mainstream consumer.

While a high barrier of entry exists today for the average consumer’s adoption of blockchain-related technology and applications, and while related communities are not always the most inclusive, CryptoKitties has succeeded in providing an open platform for a diverse and inclusive base of users, regardless of their level of technical ability, gender, or previous interest level in cryptocurrencies or blockchain. And, perhaps most excitingly, CryptoKitties offers only a simple and small taste of what applications based on smart-contracts can do. Several copy-cats (pun-intended) have already been inspired — what’s next?